Ultrarunner Ryan Ghelfi gets injured and decides to dive into the world of gravel biking for a season.

-Ryan is an owner and coach @ Trails and Tarmac. He lives with his wife and two boys in Ashland Oregon.

At the end of April 2022 I found myself recovering from running the Canyons 100k, hoping to quickly gear up to race the Cascade Crest 100 miler in Washington three months later. After a week off running I got out for some short 3-5 mile jogs. It was on one of these typically inconsequential runs that my foot began to hurt, a lot worse than an expected post race ache or pain that ultrarunners often feel. After a couple more runs with the pain getting worse not better I realized that it was most certainly a “bone injury”. After talking with Salt Lake City based PT Jimmy PIcard I decided to skip the MRI and consider myself in stress fracture land. Spending all the time and thousands of dollars to confirm what I pretty much knew just didn’t make sense. Rather than attempt to “cross train” to stay fit and run Cascade Crest I opted to pull out of the race early and try to make some lemonade out of an obvious lemon of a situation.

Like most people I started riding bikes when I was a kid. I did a couple races on mountain bikes, and even a few 24 hour and multi-day adventure races where biking was a large component. But I hadn’t raced on a bike in at least 15 years. I was fortunate enough to come to own a top notch gravel biking steed, made by a world class custom frame builder Chris McGovern, so it only made sense that I should sign up and train for a gravel biking race. I chose the Ochoco gravel grinder 2.5 months down the road. Plenty of time to become an expert bike racer right……..

I knew that no matter how hard I trained, 2.5 months was never going to be enough time to be truly competitive in an 83 mile race against people who have been racing bikes for decades and dozens of times a year, but still, I wanted to try and do as well as I could. I rode the bike most days, doing different types of workouts, but primarily focusing on uphill stuff cause I live in the hills and it’s a lot more fun than riding on flat ground. T&T coach Brett Hornig kept me on task and I got better, both in terms of bike handling and in my ability to sustain higher power outputs. (sidenote: I don’t own a power meter, or a fancy indoor bike trainer, so my training metrics are for the wanting. I did PR on quite a few strava segments during the training block at least, ha!) 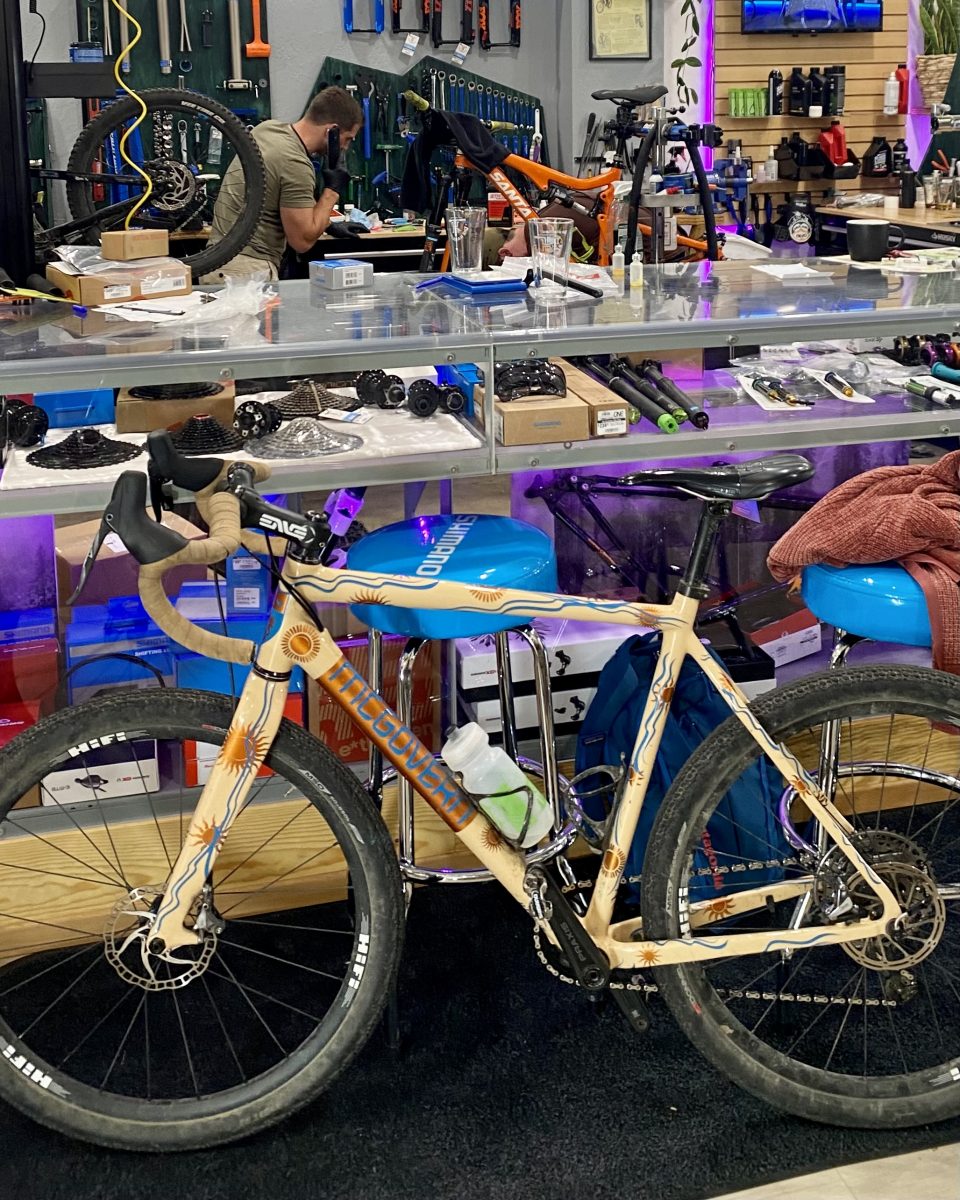 Let me backup a step. What is gravel biking you ask?? For starters it’s a form of biking that has gotten MUCH more popular over the last few years. It’s a type of riding that fits somewhere between road biking and mountain biking,  but it’s likely closer to the road biking realm than the downhill dual suspension squishy bike realm. Drafting plays a big role in tactics, and most racers are on rigid (no suspension) bikes with slightly knobby slightly wider tires. There are many flavors of gravel bike race, but the one I chose consisted primarily of dirt roads with modest elevation changes.

As race day approached things got busy in my life. I had a few fastpacking trips to guide for my new company which meant I didn’t ride nearly as much as I would’ve liked to in the two  weeks leading up to the race. And then came some gear issues. I think one of the biggest differences between trail running and gravel biking has to be the gear, certainly in terms of the cost, but also in terms of the complexity. Trying to choose the right kind of bike, the right tires, wheels, drive train, shifting, it can be overwhelming. I opted to make a few changes to my bike a couple weeks out from the race which ended up causing some problems. It was not the fault of any one person in particular, but it definitely taught me that making changes to a bike is never simple, and if you can learn to be your own bike mechanic it’s probably a worthwhile though super time consuming endeavor. Bottom line, on the morning of my race I discovered that my back brake was constantly dragging on the rotor, and there was nothing I could do to fix it before the race started. It was a bit demoralizing as it was certainly going to have a negative impact, but not so much that I would not be able to do the ride, so I got into the start corral and got going!

The start of most gravel bike races are “mass starts” meaning everyone goes at once just like a trail/ultra running race. The difference is that the speed is 2-4X faster and someone in the field falling isa near certainty. Sure enough two miles into the race, just to my right, a rider’s wheel washed out on the loose golf ball sized gravel and he went down hard taking out a bunch of riders behind him. Thankfully I was able to dodge that bullet. The front pack quickly jetted away from me with their superior handling ability and power output. I did my best to try and jump into pace lines and work on my racing tactics as we got going.

The course traveled through the Eastern Ochocos, a range of mountains in North/Central Oregon, rolling in nature, primarily forested with large expansive meadows and a huge blue sky. The day was hot, and the race started at 9am, so the heat was a factor.There was 6,000ft of climbing over the 83 mile course, which might sound like a lot, but over that distance there was a lot more flat compared to steep terrain.

Another difference between biking and running is that your GI system is not being jostled in nearly the same way. It’s so much easier to consume and digest lots of calories. I also found that it’s easier to bonk even when I was taking in 300+ calories an hour. Things went smoothly enough through about 60 miles. I had been working with a group of four other riders which was super fun, leading, then drafting, then leading. It turned out I was probably not strong enough to do as much leading as I was doing, and I fell off the back HARD. From the final aid station at mile 66 to the finish 17 miles later I was alone and in a state of semi survival mode. I didn’t die completely, but there was no way I could stay with those riders. The importance of staying with and drafting in a group can’t be understated.

After nearly 5.5 hours I managed to finish the final climb. The atmosphere was similar to a good trail running race with music,  food, beer, and in this case bloody mary’s and other mixed drinks. My body was beat up and sore, but in ways totally different from a trail ultra. While there might not be “impact” riding bikes, that doesn’t mean your body will come through without stress or strain. There was a second  day of racing I could have taken part in on Sunday, but I was too wrecked to contemplate another 5+ hours on the bike.

So, would I do another gravel bike race? Absolutely. It was an amazing experience, and something so different  from running. Do I think I’ll be switching sports for good? Absolutely not. I love running and the simplicity of lacing up a pair of shoes and moving through the mountains unencumbered by too much gear. I am also probably better at running than biking. But I believe switching it up and trying new sports is a really good thing. In this case I could have been bummed out about being injured, unable to run and missing Cascade Crest, but I was able to pivot, refocus and get a lot of learning and joy out of these past few months. I am feeling good on two feet again and excited for whatever running endeavor I decide to tackle next.

If you have questions about gravel biking send them my way. I might have a good answer. And in the likely event that I don’t I can find some people who do